The final round of PremiAir Racing’s rookie season is set to be a big one, with the highly anticipated return of the VALO Adelaide 500 across December 1-4.

The team heads to the event with a new chassis for #31 Subway PremiAir Racing driver Jimmy Golding. Chassis 888a-053 was last driven by Craig Lowndes and Declan Fraser at the Bathurst 1000 as a wildcard and has previously taken victory in Adelaide at the hands of Jamie Whincup. It replaces chassis 888A-044, which sustained heavy damage at the Gold Coast. This weekend will be not only the last of the 2022 season but also the last for the current generation Supercars. So, while the team has been hard at work preparing the new chassis for Jimmy, they have also taken advantage of the larger than usual gap between events to undertake work on their new Gen3 cars in preparation for next year.

“It sure has been a massive year for PremiAir Racing, and we can’t wait to see what Jimmy and Chris can do on the infamous streets of Adelaide this week to bring the 2022 season to a close,” PremiAir Racing Team Principal Matt Cook, said.

“The buzz around this event is already really ramping up as everyone, drivers, teams and fans alike, are so excited to see it back on the calendar after a few years away.

“The team has been working hard to not only prepare for the 500, but also for next year, and we are looking forward to hopefully seeing that hard work rewarded with strong results in South Australia this weekend.”

Ahead of the event, seventy percent of the street circuit has been resurfaced for the first time since the Grand Prix days of the eighties, which will see all drivers and teams essentially starting from scratch.

“While tyre degradation is definitely going to be a factor to manage in light of the new surface, I also think we can expect to see some of the fastest lap times in the history of the Adelaide 500 this weekend, and that is very exciting!” Cook said.

The 2022 VALO Adelaide 500 will mark Golding’s sixth trip to the Adelaide street circuit, and his third Supercars round at the venue. “I am really looking forward to getting to Adelaide – it is one of the best tracks on the calendar and it is fantastic to see it returning to Supercars after a couple of years away,” Golding said.

“This will be my sixth time racing at the Adelaide 500, and it is a track at which I have had success previously, so I can’t wait to continue our current form, hopefully, and to keep progressing up the grid.”

“The resurfacing will definitely play a pretty big role when it comes to strategy and will be something for everyone to consider and get their heads around. Everyone knows the old surface pretty well, so it will certainly change things up.”

Chris Pither hopes to end his tenure with PremiAir Racing on a high in Adelaide.

“To have the Adelaide 500 back to finish out our 2022 season is great, and I can’t wait to see what we can do in the #22 PremiAir Coca-Cola Racing Supercar this weekend,” Pither said.

“We will once again be carrying the retro livery honouring the 1995 Coca-Cola car which has proved quite popular over the last few events, and hopefully we can carry it all the way to a good result for our final event.

“I had a personal best PremiAir Racing result on the Gold Coast, so hopefully we can continue that momentum into this week’s racing and really give our fans something to cheer about to round out the season.”

The Repco Supercars Championship’s final round of 2022 – the VALO Adelaide 500 – will be held across December 1-4. For event information, visit www.supercars.com.au 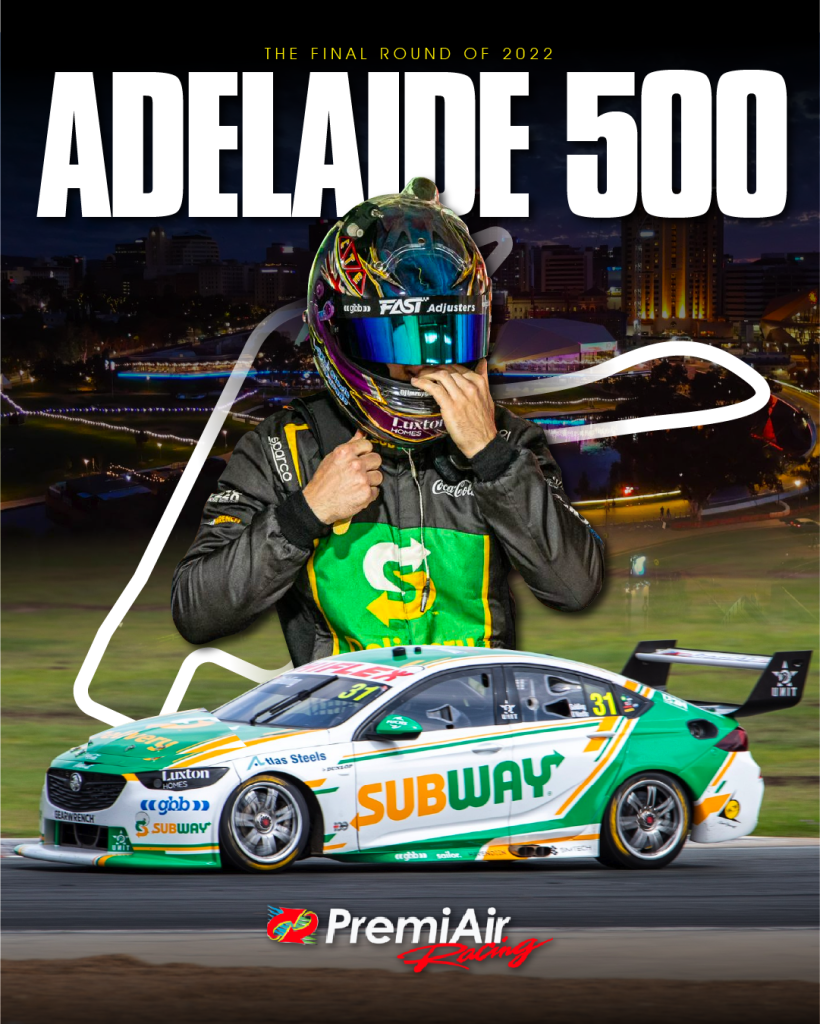