The tribute livery carried by the #22 PremiAir Coca-Cola Racing Supercar at the Repco Bathurst 1000 will remain on the car for the remainder of the 2022 Supercars Championship! 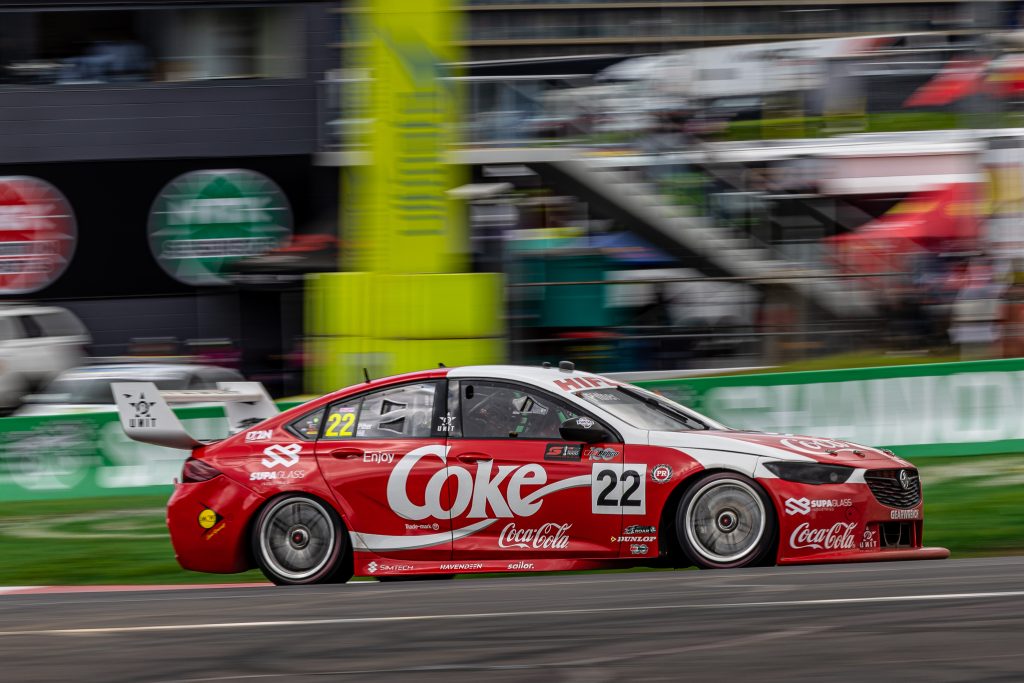 The team and Coca-Cola have elected to keep the striking look for both the Boost Mobile Gold Coast 500 and VALO Adelaide 500 in continued tribute to the 1995 #7 Coke Supercar which was driven to third place at that year’s Great Race by Wayne Gardner and Neil Crompton.

“The #22 PremiAir Coca-Cola Racing Supercar looked absolutely fantastic at the Bathurst 1000 and so, with the support of Coca-Cola, we have decided to keep the look for the remainder of the season,” PremiAir Racing Team Principal, Matt Cook, said.

“It is such a great looking livery, why would we want to change it! With two rounds left to run this year, we are so pleased we can take this opportunity to keep the livery on the car as we look to finish out the season in the best fashion possible.”

“This livery was hugely popular at the Bathurst 1000 and we had so many fans coming up to us to tell us about their memories of the car, so I think it is fantastic that we are keeping the look for the final two rounds of the season,”

“The #22 PremiAir Coca-Cola Racing Supercar is going to cut a fine figure on the streets of Surfers Paradise and Adelaide for sure, and I look forward to racing hard and seeing what we can do as we try our best to finish the season on a high.”

Coca-Cola Europacific National Partnerships Manager, Lyndon Hunter, said he was very pleased that the retro livery would be continuing throughout the rest of the season.

“To have such an iconic look on the car which is instantly recognisable and obviously has a lot of synergy for us, being backed by Coca-Cola, is just a no brainer,” Hunter said.

“The car looked brilliant at Bathurst and when the opportunity came for the livery to stay on the car for the final two events of the year, of course we were right on board with that.”

“We can’t wait to see the car flying around the streets of Surfers Paradise and Adelaide, in a wonderful tribute not only to the #7 but also Coca-Cola’s long and passionate association with motorsports.”

The #7 Coke car was one of a number of Coca-Cola backed entries run by Wayne Gardner after he established his own touring car team in Sydney in Mona Vale in 1994, purchasing Bob Forbes’ existing team that had run a single GIO-backed car for Neil Crompton in 1993.

Together, Coca-Cola Racing and Wayne Gardner Racing ran a pair of Coca-Cola backed commodores full-time in 1994 and 1995, with Gardner and Crompton driving the #7 Coke Car to third place in the 1995 Bathurst 1000.

The 1996 season saw the #7 run as a single car for Gardner at all events. It was joined by the second car at the Bathurst 1000 before both cars went on to take part in the end of season New Zealand series.

Gardner again fielded the cars at select events in 1997, before closing down the team and selling off most of the cars and equipment – although he retained one and ran it in select races in 1998 before driving a Coke-backed, Perkins Engineering-prepared VT Commodore in marque rounds in 1999, still with Coke backing. The last time he raced in Coke colours was at Bathurst in 1999.

PremiAir Racing is currently undergoing final preparations for the upcoming Boost Mobile Gold Coast 500, which will be the penultimate round of the 2022 Supercars season and held across October 28-30. The final round of the championship will then be held in Adelaide, at the returning VALO Adelaide 500 across December 1-4. For event information, visit www.supercars.com.au