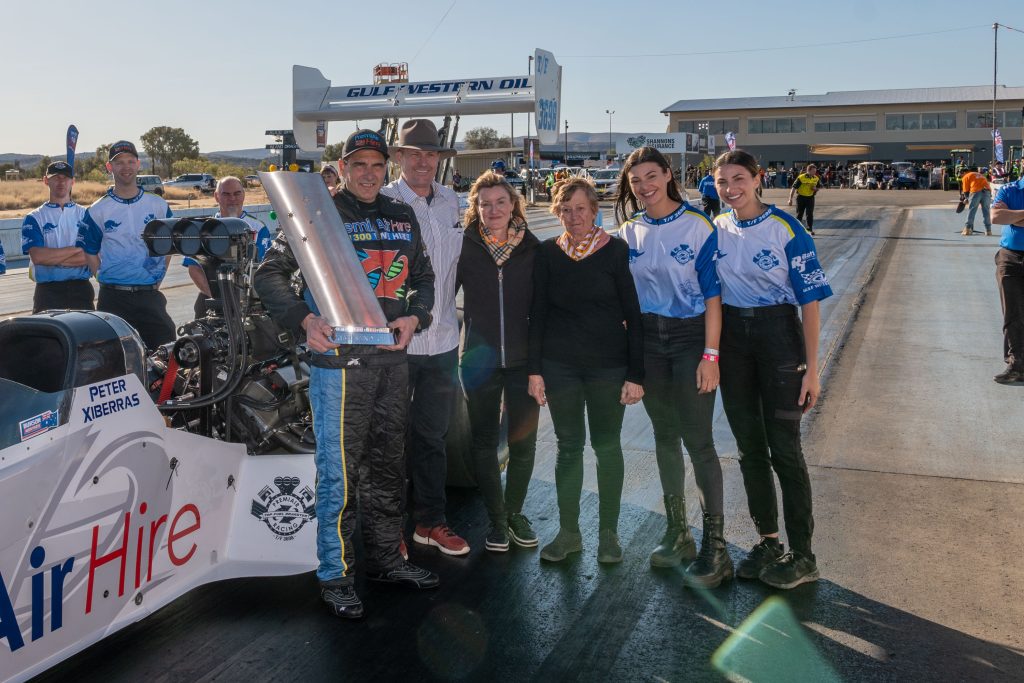 The fastest drag racing series in the country, the Burson Auto Parts Australian Top Fuel
Championship, demands an award as spectacular as the racing it serves up each round.

When Top Fuel Australia’s Nathan Prendergast reached out to the Sainty Family late last
season to ask if they could name the championship in Stan’s honour, the wheels quickly began turning.

“And what an honour it is that we most graciously accepted,” said Stan’s wife, Margaret
Sainty. Top Fuel Australia wants to race for a purpose and with meaning. They see Stan as
an Ambassador and pioneer for Top Fuel and could think of no one better to bestow this
glory upon. 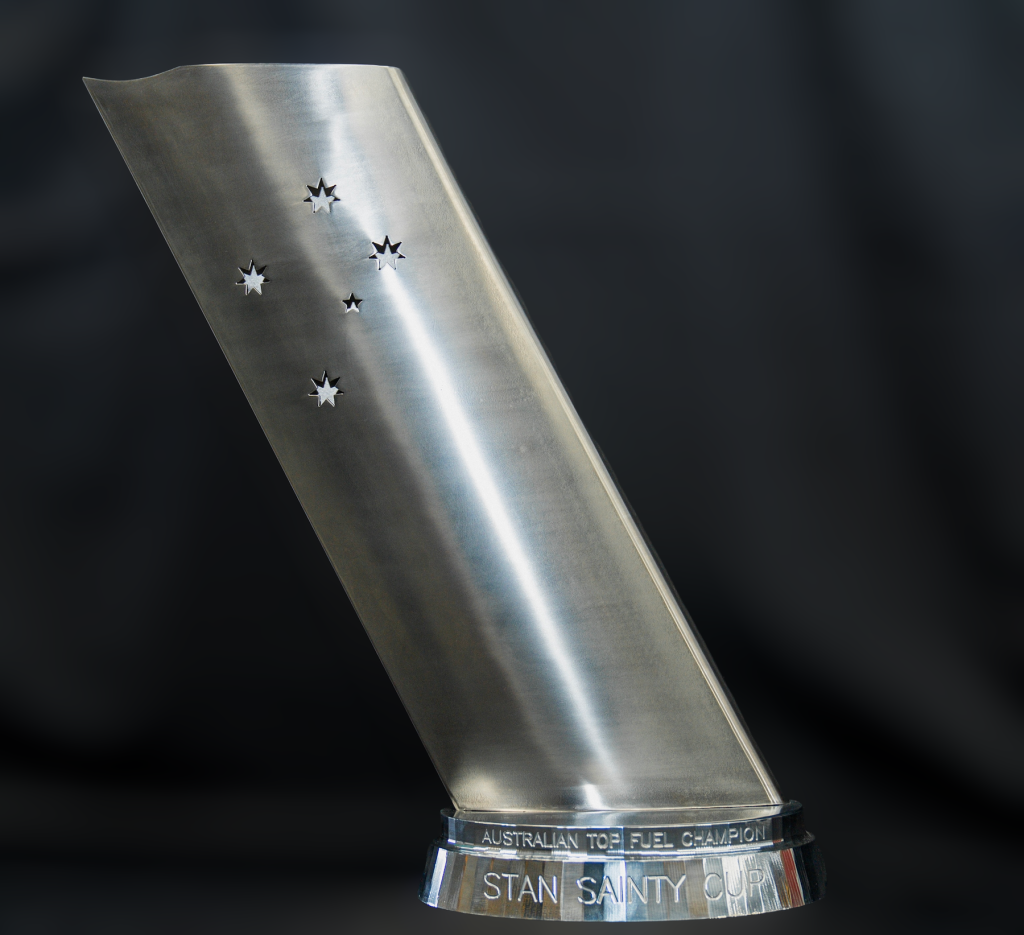 “Stan was a master machinist who had an incredible talent for engine design. In life, Stan Sainty seemed unconquerable. He was big and strong, with the hands of a man who made his living by hard work. He was quiet, generous, uncomplicated; a humble figure who was just doing what he loved.”

The Stan Sainty Cup has been 100% proudly made in Riverstone Australia in the Sainty
Engineering workshop. Terry and his tradesman, Billy Foster, have spent more than 200
hours designing, machining, fabricating, welding, and polishing a truly unique trophy with
meaning to capture the essence of both Stan Sainty and Top Fuel. 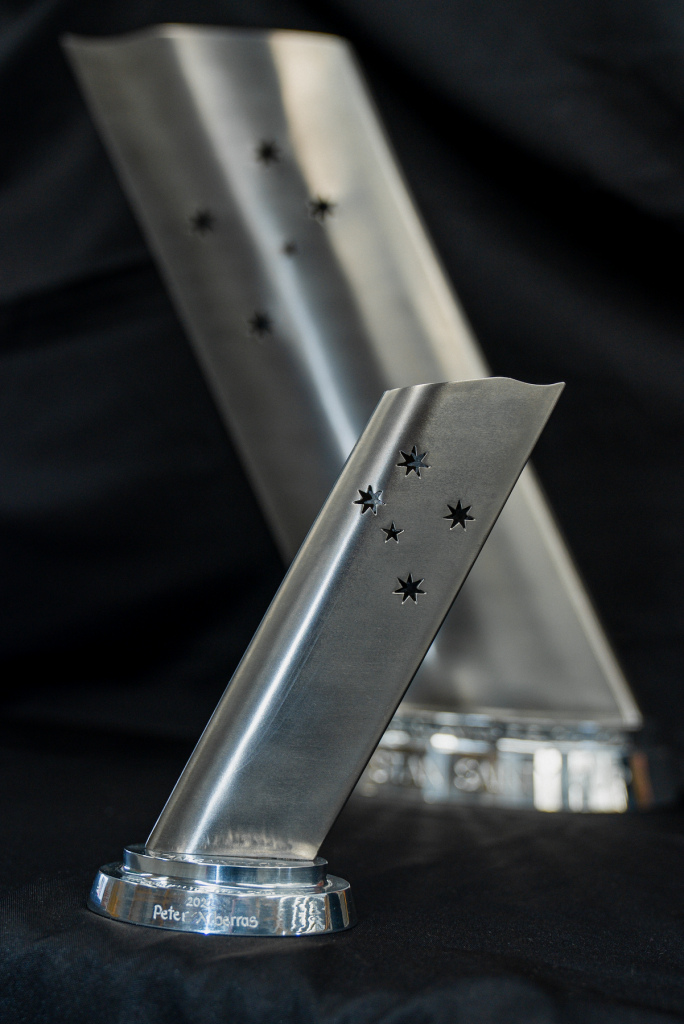 The base of the trophy is made from a solid block of billet aluminium, just like a Top Fuel engine. It is CNC-machined with facets and engraved on the oval face and underneath as well. The vessel is crafted from titanium sheet and is argon tig welded. The shape is inspired by the rear wing struts on the dragster and set at an angle of 63 degrees. The stars of the Southern Cross have been cut out of the titanium cup creating a shadow and is a proud representation of the Australian culture and the constellation of stars that can only be seen from the southern hemisphere.

Creator of the Stan Sainty Cup, Terry Sainty said: “This is not your average trophy. I wanted to make something unique but with meaning. This really pushed me out of my comfort zone and the emotions of creating something in memory of my dad made it even harder. I spent a lot of time considering the design and wanted to be able to make the trophy fully inhouse, this is the Sainty way. I really respect all the racers and Top Fuel Teams.

“Top Fuel is a really challenging category to compete in. We have tried to create something
special with this cup by avoiding all the usual materials that trophies are made from and
make a trophy that reflects strength and determination, both things that my dad had for his
commitment to his lifetime of work and unwavering passion for Top Fuel.

“It was important for me to make something that will last forever and be a unique piece,
something the Top Fuel Championship winners will really want their name engraved directly
into the billet aluminium. Working with the titanium and billet aluminium presented some
real manufacturing challenges when trying to create something as refined as this, but I am
proud of what I have made in tribute to my dad and the sport we competed in together with
our own Australian designed and made engine.”

Congratulations to Peter Xiberras for being the inaugural winner of the Stan Sainty Cup. The Cup was presented to Peter on the 2nd of September 2022 at round one of the Burson Auto Parts Australian Top Fuel Championship at Alice Springs Inland Dragway during the Red CentreNATS event.