The PremiAir Racing team have pulled off a massive effort at the Perth Motorplex’s Goldenstates with a complete rebuild between round two and the B-Final to take an edge-of your seat victory over Wayne Newby with a 3.982 second pass at 425.12 kilometres per hour. 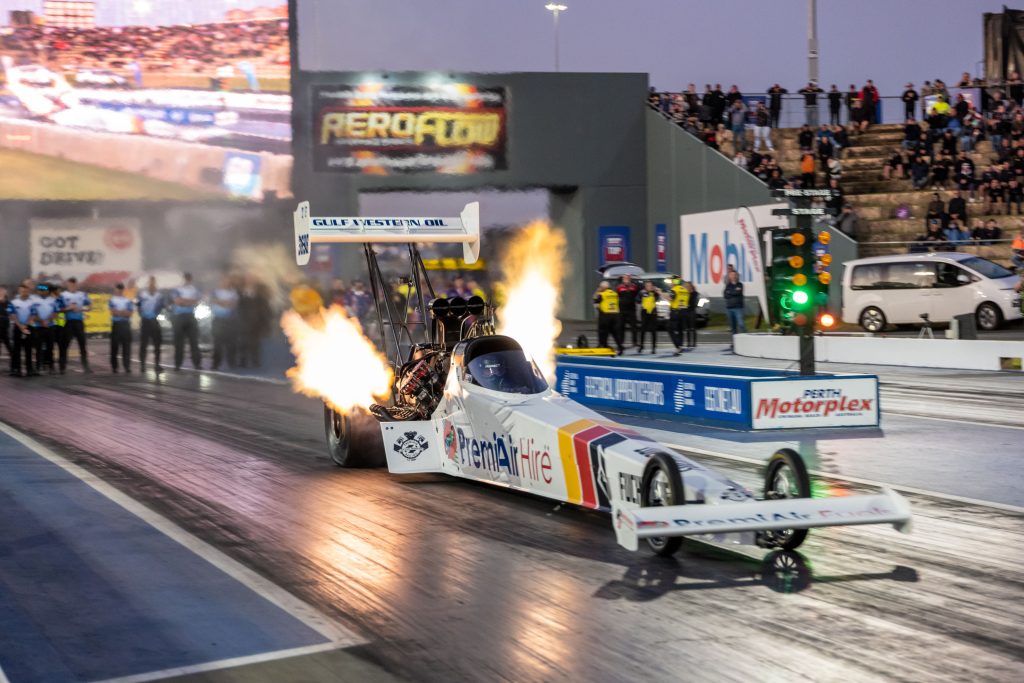 The victory – a re-match of the postponed Alice Springs B-Final which was held during qualifying on Friday evening with Newby taking home the chocolates in that occasion – was especially sweet given the depths to which the team had to dig deep to get the PremiAir Racing Top Fuel Dragster race ready in time for the third and final round of racing.

“It was an awesome job by the whole crew, we had a pretty big blow up in the second round and they pretty much had to change everything from the engine to the heads to the blower and they did a great job to get it done and make sure we could get down the track for the B-Final,” Xiberras said.

“Wayne actually had the lead there early, but we were able to drive around him in the top end to take the win which felt pretty great.

“Now we look ahead to the next round at New Year Nitro at Willowbank Raceway. Willowbank has always been a pretty good hunting ground for us, so we are looking forward to heading there and hopefully we can break through and get our first A-Final win for the season there at our home track!”

The Goldenstates action kicked off on Friday evening, with the first qualifier seeing the PremiAir Racing Top Fuel dragster on top of the qualifying sheets following a nice and solid pass for a 3.915 ET at 419 kilometres per hour despite tricky and rapidly cooling conditions. 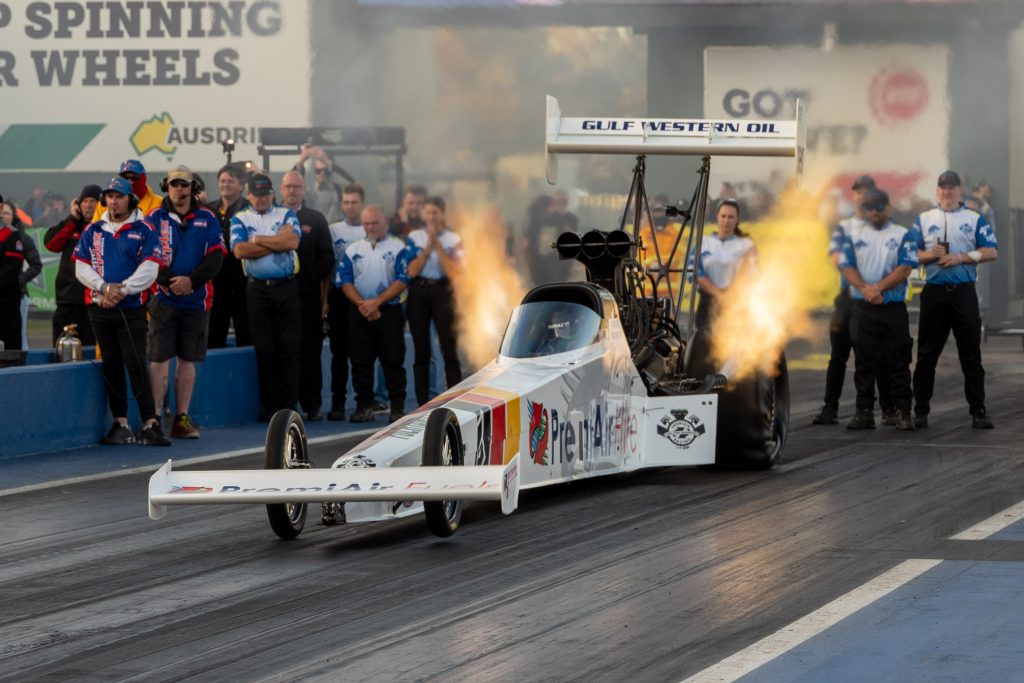 In the second qualifier – which doubled as the postponed finals for Alice Springs – the temperatures had dropped even further and unfortunately the PremiAir Racing Top Fuel dragster went up in smoke on the hit, seeing the team drop to second on the qualifying sheets and record a B-final lose to Wayne Newby to be classified in fourth in the Alice Springs results.

While disappointed to lose the top qualifying spot and the B-Final, the team were not discouraged and headed to work refining their approach ready for Saturday’s running, with more cold conditions expected – so much so, that event organisers elected to reschedule the Top Fuel running times to be earlier than originally planned to try and avoid the coldest times of the evening.

Come Saturday, the racing got off to a positive start for PremiAir Racing, with Xiberras fronting up against Shane Olive in round one and going on to take the win with a 4.017 second pass at 256.27 miles per hour despite the dragster getting slippery in the top end, with Peter having to make a move towards the middle.

The second round of racing was a case of good news, bad news, with a fantastic run for a 3.992 ET at 489.95 kilometres per hour unfortunately soured by a red light and a banged blower at the finish line.

Based on those results, Xiberras lined up in the B-Final against Wayne Newby in a re-match of their Alice Springs B-Final from the day before, only this time, with a more pleasing result for the PremiAir Racing team.

All through the event, PremiAir Racing, along with all of the Top Fuel racing teams, was keeping someone special in mind throughout the event. 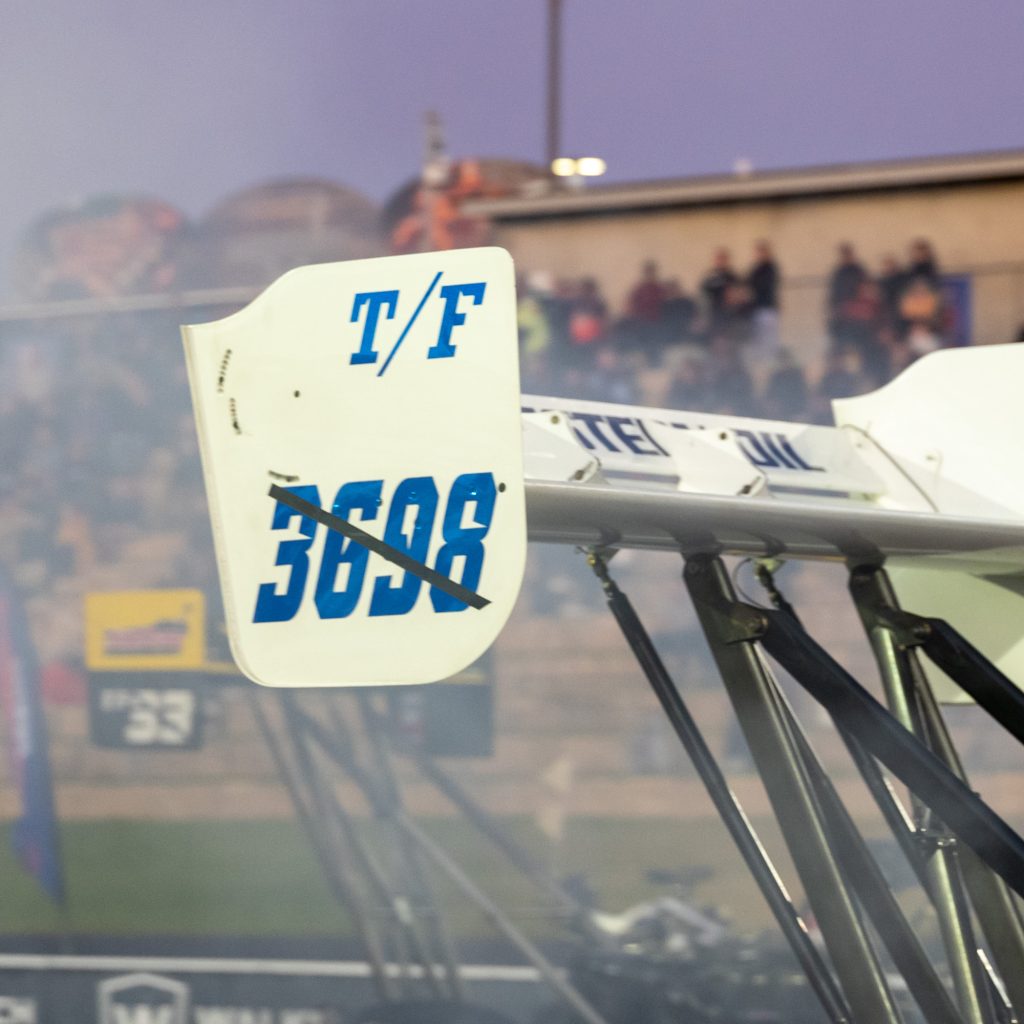 “Keen observers will have noticed that we were running a black band on the rear wing during the event,” Xiberras said.

“This is in memory of Jim Read Racing truck driver, Grant ‘Fozzie’ Foster, who sadly passed away in his sleep at a truck stop while en-route to this event.

“Fozzie was a fixture of the Top Fuel pits and had been a part of most of the teams at one time or another, and so his sudden and unexpected loss has been deeply felt throughout our sport. We hope our fans will join us in sending our condolences to Fozzie’s family and friends at this very sad time.”

PremiAir Racing’s Top Fuel Dragster will next be in action for the Burson Auto Parts Australian Top Fuel Championship across January 6 and 7 at Willowbank Raceway for the New Year Nitro Event. For event information, go to www.topfuelchampionship.com.au or www.willowbankraceway.com.au

Before they head to Willowbank however, PremiAir Racing will be in action in Adelaide for the Repco Supercars Championship’s final round of 2022 – the VALO Adelaide 500 across December 1-4. For event information, visit www.supercars.com.au